Pretending to have humility is almost as good as actually being humble. In fact, the more you pretend to have humility, the more humble you actually become. You condition and discipline your flesh, taking on the affectations of someone who is broken for Christ and, in so doing, you begin to not only adopt the language of humility but the substance of it. Start here: close your mouth.

who launches into an explanation of how WiFi works. I know how WiFi works. I’ve built many WiFi networks. All I asked him was what aisle the network cards were in, but he starts selling me. And it’s hard to break this guy up because he’s on a roll, now, and he’s taking me to school. He’s made absolutely no attempt to know me or to at least establish my level of knowledge or training so he can best assist me. He’s just assuming I’m another housewife walking through the door and is launching into his prepared speech. He has become an overbearing bore whom I am now desperate to get away from. He is a lousy salesman.

I can usually tell people who know God from people who claim to know God within a few minutes of walking into a room. People who claim to know God tend to be talkers. Preachers who just keep talking. And talking. Dominating every meeting, every class. Always got their hand up. Going on too long. People dismissive of you for no apparent reason, who make no effort to know you or to determine your level of knowledge of and relationship to Jesus Christ. They just start talking, teaching, lecturing. They’re making complete fools of themselves because they are, as often as not, telling you things you already know and, as often as not, getting the doctrine wrong. And you’re usually stuck, standing there being bored to death, because they simply won’t stop talking. These people are revealing themselves to be dilettantes. They are also revealing their pastor to be a dilettante because, more often than not, the pastor is aware of these traits and habits and has not cautioned these people for their own good: stop flapping your gums so much.

The most obvious byproduct of the indwelling of the Holy Spirit is love [John 13:35]. Second to that is humility, an innate demonstration of how broken we are for God [Ephesians 4]. It is a declaration of vulnerability: I Am Not All That I Could Be or All That I Will Be. It is an openness to share. Sharing is two-way: it’s not some brassy sister (and it is usually the sisters) yammering on and on, competitive and dismissive, never allowing a word in edgewise. Christians, true Christians, listen. We are open for business. We are gentle. We share. We embrace one another in love. We greet one another with a holy kiss, with a heartfelt embrace. We do not address one another outside of our calling, most especially in mixed company.

But this is what The Matrix does to you. It creates an inflated sense of self. You and you alone know God, know truth. I am midway through my thirty-fourth year in ministry, yet I have routine encounters with ministers—again, typically the sisters—who were licensed maybe eighteen months ago. These people start talking soon as I enter a room. Their mouth gets dry, that white stuff forming in the corners, and they don’t even notice or care that I have not spoken as they blather on about the wonders of WiFi. These people are idiots. They are revealing themselves to be idiots. Standing before them is experience and wisdom but they’re not interested in that. They just want to strut, to flash peacock feathers.

Meanwhile, over in the corner, is someone else—most often a male minister. Many male ministers here have military training and embrace the concept of seniority. There really is no seniority in Christ; we can learn and grow from anyone. But these brothers usually embrace me, sincerely greet me, and we sit and reason together, sharing equally and open to learn and to grow. That is Christian maturity. The demonstration of Christian humility, a certain quietness of spirit, is evidence of Christian growth.

Faking It? Just As Good.

The bible teaches us that being effective in Christian ministry is predicated upon how seriously we are taken as Christ’s disciples. As demonstrated by Christ’s relative ineffectiveness during his visit to Nazareth [Matthew 13:57], respect creates an environment within which we can be effective. If people think you’re a clown or a dilettante, they simply won’t take you seriously. Some of that is our fault for actually being a dilettante. Some of that is Church Folk being Lost in The Matrix and cut off from Christ—as were the Nazarenes when the Son of God walked among them. Some of the fault lies with the pastor for inept teaching and for allowing the heinous and ungodly worship of Pastor to go on on his watch. Whatever the reasons, staying at a church where you are not taken seriously is just more self-deception on your part. To those people, you are a child, a novice. Many if not most of them will never see you any other way. Now, maybe you did that to yourself. Maybe these folks are just ignorant. Whatever the cause, your ministry is not effective or functional.

Now, here’s the dirty little secret: pretending to have humility is almost as good as actually being humble. In fact, the more you pretend to have humility, the more humble you actually become. You condition and discipline your flesh, taking on the affectations of someone who is broken for Christ and, in so doing, you begin to not only adopt the language of humility but the substance of it. Start here: close your mouth. Like monastic monks, take a day or a week and fast from unnecessary talking. Just be quiet. Greet one another warmly, in love, with a genuine smile and warm embrace, but do not launch into your usual yammering mess. Just shut up. People will think something’s wrong with you. Start to listen. Pretend to listen, because many of us are simply not used to actually listening. The more you pretend to listen, the more you’ll learn to actually listen, to actually receive not just someone’s words but someone’s heart: to learn who they truly are inside and what their actual needs are.

The slower you are to speak, the wiser you begin to seem. Resist the urge to rebut every point or engage in every debate. Just be quiet. Wait your turn. And, when you do speak, be prepared. Organize your thoughts beforehand. Make your point—and shut up as fast as you can. Brevity will win you additional opportunities to speak. Your constant blathering makes you seem foolish and ridiculous, the people in the room dread your hand going up, and you find yourself having to bully your way into the discussion because once you have the floor, you refuse to give it up. This business is so common, I am shocked that I’ve never seen a pastor teach on this. He is teaching whatever he’s teaching his associate ministers, but he does little or no teaching on being taken seriously as a minister, the basic aesthetics of which are quite simple: be slow to speak, quick to listen [James 1].

Our model should not be gregarious, loud Church Folk, or even the abrasive performance of a pastor's Sunday sermon. As Christians, our model should be the humble and broken Jesus Christ. The bible records several examples of Jesus talking—delivering sermons and such—but most examples are of Jesus responding to questions posed or to situations involving others. He listened. He evaluated who these folks were and what they needed. He didn't cut them off or talk over them. Jesus was humbled and broken. He had a quietness of spirit, a warmth and a willingness to give. He is the Son of God, Who could have arrogantly lorded it over everyone—including the ruling Romans. But He came, instead, as a servant. A Man Who owned nothing. Who never esteemed Himself above even the least of those following Him. This is our model for Christian conduct. That we behave in any way other than this personal example is evidence enough of our spiritual immaturity and self-deception, a people claiming to know God but who are, in fact, deceived by the enemy and Lost in The Matrix. 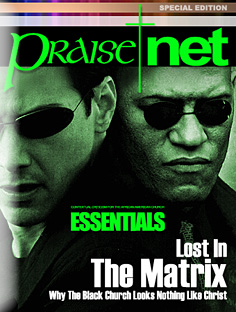 My dear brothers,  take note of this: Everyone should be quick to listen, slow to speak35 and slow to become angry, 20 for man's anger36 does not bring about the righteous life that God desires. 21 Therefore, get rid of37 all moral filth and the evil that is so prevalent and humbly accept the word planted in you,38 which can save you. 22 Do not merely listen to the word, and so deceive yourselves. Do what it says.39 23 Anyone who listens to the word but does not do what it says is like a man who looks at his face in a mirror 24 and, after looking at himself, goes away and immediately forgets what he looks like. 25 But the man who looks intently into the perfect law that gives freedom,40 and continues to do this, not forgetting what he has heard, but doing it--he will be blessed in what he does.41 26 If anyone considers himself religious and yet does not keep a tight rein on his tongue,42 he deceives himself and his religion is worthless. 27 Religion that God our Father accepts as pure and faultless is this: to look after43 orphans and widows44 in their distress and to keep oneself from being polluted by the world.
—James 1:19-27