When you are operating outside of your gifts, your work will tell on you. You should be embarrassed. You would be embarrassed, but your ego is like a defense mechanism preventing you from even realizing how far out of your element you are. And that’s how you know you’re in trouble: when you’re doing something obviously mediocre and meddling in things you do not understand and you’re not even embarrassed about it. Life will inevitably become more rewarding when you stop going your way and instead move in-stream with the Holy Spirit, working through those gifts and talents God has ordained uniquely within you.

The Prophetesses on “Preach,”

Lifetime’s new reality show, are certainly operating with­in their gifts, although we can debate what, spe­ci­fic­al­ly, those gifts are. Most self-proclaimed “prophets” have the gift of deception. Many are, first and foremost, prac­ti­tion­ers of self-deception, and are experts at bamboozling simple-minded folk. The few true prophets I’ve met in my life have been incredibly humble and nothing at all like what you might expect. Real prophets don’t barge or stomp into your life. Real prophets kind of creep up on you, quietly, patiently. Sometimes you don’t even realize who or what they were until they are long gone. The loud, brash, self-proclaimed “prophet” is usually someone incredibly lost and in desperate need of attention and external validation. The thick pancake foundation, over-the-top hair, excessive jangly accessories and garish, streetwalker eyeliner make the women of Preach look like aging hookers. Worse, they seem to either inspire or enforce those optics on their young protégés—beautiful and, yes, sensual young women painted in shocking hues of metallic teal and bright neon makeup blazingly garish in HD—unattractive doesn’t begin to describe it. The tight-fitting, revealing dresses are also not inspired by the Holy Ghost. It’s as if these women know nothing at all about Jesus, whom even gnostic historians agree was not a flamboyant character but a guy you’d likely pass on the street unnoticed were it not for the multitudes that followed Him.

The noted exception seems to be Dr. Belinda Scott, easily the most rational of the group, who seems to wear the least makeup and dresses like a grown-up. Dr. Darrell Scott, her no-nonsense husband and her church’s senior pastor, steals the show from the ladies with his blunt, hilarious commentary, where he seems skeptical of the reality show if not the divas themselves. At one point, the pastor bluntly rebukes the competitive spirit between the prophetesses, “I don’t want any shenanigans in this deliverance service. I just want them to get up there, say what God has to say, and shut up. If God wanted us to walk on chairs, he’d have put feet on our butts.”

Therein lies Preach’s saving grace: moments where God’s truth is echoed past the carnival atmosphere, such as where breakout star Dr. Taketa Williams—whose repulsive blonde two-toned weave, Wolverine fingernails and Tammy Faye eyelashes, for the most part, made my skin crawl—utterly stopped me in my tracks late in the show were she rebuked her young protégé Rebecca—a heartbreakingly earnest young follower struggling to raise two girls on her own while dealing with a third child living with her estranged ex—about materialism and ego, “It’s not about us.” Williams’ image epitomizes the Black Church Lady stereotype this online ministry is, in part, intended to counter. For the majority of the series pilot, she is the most colorful and gregarious of the bunch and certain to become the show’s breakout star in the sense of people laughing at and not with her. However, if she is afforded more of these profound, quiet moments where her doctrine catches up to her gregariousness, she will ably redeem herself.

What The Gifts Are: Williams body slams a worshipper.

The ladies are intelligent enough to know the show will be both an object of controversy and ridicule, as many people watching to laugh at the circus as to engage in any meaningful or productive learning or worship experience. How much of this noise are gifts of the Spirit and how much is just foolishness and ego is left largely up to the viewer to decide.

The closest reference I have to any of this is a wonderful pastor in Aurora who operates along the same lines of spiritual gifts, healing and prophecy, but who is the very antithesis of these noisy but entertaining ladies. Pastor Joelle Suel, Ph.D., “Dr. J,” of Glory To Glory Christian Center, is manifestly humble and broken for Jesus Christ. She is quiet and unassuming, lives and dresses modestly, and evokes a quiet peace and maturity that commands authority. Her operating environment is love, which she evokes in everything she does. She is gifted with enormous patience—Rock of Gibraltar patience—which is a key indicator of God’s Spirit indwelling within her. She does not permit posters or huge images of herself to be displayed anywhere, and she is so concerned about the spiritual welfare of her congregation that she disallows still photography of worship sessions; she does not want photographers sticking cameras at people desperate for deliverance.

Brassy ladies with short tempers and even shorter attention spans display char­ac­ter­is­tics (fruit of the Spi­r­it) di­a­met­ric­al­ly opposite to those of the personal example of Jesus Christ. It is impossible for any of us to not have an ego—that’s part of what makes us human. The test is to get that ego under submission so God can work through us. 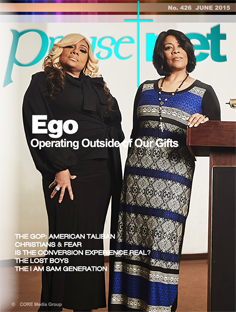 “The words of the Preacher, the son of David, king in Jerusalem. 2 Vanity of vanities, saith the Preacher, vanity of vanities; all is vanity. 3 What profit hath a man of all his labour which he taketh under the sun? 4 One generation passeth away, and another generation cometh: but the earth abideth for ever. 5 The sun also ariseth, and the sun goeth down, and hasteth F1 to his place where he arose. 6 The wind goeth toward the south, and turneth about unto the north; it whirleth about continually, and the wind returneth again according to his circuits. 7 All the rivers run into the sea; yet the sea is not full; unto the place from whence the rivers come, thither they return F2 again. 8 All things are full of labour; man cannot utter it: the eye is not satisfied with seeing, nor the ear filled with hearing.

Prayers are about to be answered with Lifetime’s all-new docuseries "Preach," premiering Friday, June 5th, at 10pm ET/PT. With the religious leadership world primarily dominated by men, the show produced by CORE Media Group follows four powerful female leaders who believe God has given them the ability to heal the sick, see the future and rid people of their addictions. Known as “Prophetesses,” these women speak as the interpreter through whom the will of God is expressed. In order for their legacy to continue, they must enlist a “protégé” and teach them how to carry on their gift. These Queens of the Church each have different styles and their own special way of delivering God’s message, but all are united in their love of the Lord.