Over the past year Gospel and Christian music has taken on new forms of sharing the word of God through music. We are moving forward from traditional ways of singing and writing about God and creating new ways to spread the same message to a new generation by sounds from Trap, Pop, EDM, and Rap. How much of it is worth our time and money, and where is the industry heading next?

And now for something completely different: A gospel music overview written by someone who actually likes gospel music. After a seven-year hiatus, our editor has chosen to update our Music Essentials archive and reached out to me to ask what the landscape was like these days. Despite Priest’s “harbinger of doom” predictions, the gospel music industry is actually thriving with lots of new and exciting releases in the past year or so.

Gospel and Christian music has become more and more mainstream with big-time record labels such as RCA and Sony taking their Christian product lines more seriously. Artists are looking for new ways to get their message to the masses and what better way to do it then to go mainstream with labels that have both the power and money to get things done single-genre labels and companies either could not or, in the case of Verity, a subsidiary of the mega-label Zomba Label Group, would not invest in.

Touring is back. I’d heard that touring was dead but, in the last year, several tours by Gospel and Christian artists have made that statement untrue. Tye Tribbett teamed up with the House of Blues and did a country wide tour at a good number of the chain’s facilities. While that tour was happening Fred Hammond came back with the Festival of Praise Tour that featured artists such as Donnie McClurkin, Israel Houghton, Hezekiah Walker and Kim Burrell (see sidebar). Other artists such as For King and Country, Chris Tomlin, Lacrae, Andy Mineo and even James Fortune and FIYA began touring also.

So I guess you can say the tour business is on and popping in the church arena. Another tour was that of Israel and New Breed when they took over Asia. Not only did they tour, but they recorded a whole new live album entitled Covered: Alive in Asia, which presents concert footage from several cities. Who knew the church had such an impact out there! God has shown Israel, and all of these artists, favor with these tours.

Michelle Williams surprised everyone when she stormed the gospel charts with a reunion with her former bandmates Kelly Rowland and Beyoncé Knowles for the song “Say Yes.” This cut was in heavy rotation for weeks on gospel radio networks worldwide and it landed Williams much praise and acknowledgements throughout the last year.

One Sunday, Bishop Jamal Harrison Bryant was preaching when all of a sudden a phrase from Chris Brown’s hit song “Loyal” was dropped. Bryant told his congregation to look at their neighbor and say, “These Hoes Ain’t Loyal.” The line received roaring applause and cheers, but not from everyone. Social media went in an uproar after the statement went viral, but what black pastor has not used that word or that type of phrase at some point in their sermons? Bishop Bryant has since expressed remorse and regret after women began to tweet and bash him for that sermon.

Pixar Animation Studios, famous for some of the most popular computer-animated Disney films, is now wowing Christian families with their latest film, “Inside Out.” The film depicts the lives of our emotions though the brain of a child. While the movie has been highly praised by many parents, some pastors have yet to give this film a solid yay or nay. Many people are calling this movie a great *Christian* film because it teaches us that we must learn to control our emotions and not allow those emotions to control us.

In The Eye of The Storm: The massive Hillsong live.

Trending in the Gospel and Christian music worlds are topics surrounding the LGBT community and their involvement with the Gospel music industry. Of course, a good number of our favorite Gospel and Christian hits were written and orchestrated by our brothers and sisters in the LGBT community—whether we admit we’re aware of their orientation or not. The recent Supreme Court decision on same-sex marriage now has many churches debating whether or not we keep allowing them to serve and write in churches. Many people are against this, but there are people who are actually open to moving towards a more open and affirming platform, or an at least more sensible one: better we have people in the church and not in the world right?

Hillsong NYC’s Campus Pastor is under fire for allowing a gay man to be his choir director, but now it goes further. The choir director and his partner, who also sings in the choir, are engaged to be married and want to be wed in the church in which they serve. Hillsong has been one of the pioneer churches to allow openly gay men and women to serve in their church without judgment or fear. People are in an uproar and are saying that the pastor needs to be sat down, but Co-Lead Pastor Joel Houston, who is in Australia, has stated that he wants and hopes more and more gay men and women come to their churches.

In 2013, a video was placed on many forms of LGBT and Christian media of recording artist Kevin Terry enjoying gay sex. The gospel and church communities lashed out and pretty much threw Kevin and his choir away. They were not getting engagements anymore and most Christian retailers pulled their music and videos off of the shelves. This went on for about a year, but what I find interesting is that not a ton of Christians knew who he and his choir was until this scandal came out.

In 2014, gospel superstar Deitrick Haddon visited Kevin and his choir (as we saw on The Preachers of L.A.) and, instead of bashing and preaching to Terry, Haddon ministered and encouraged Terry and his choir in their hour of need. Terry has since released two new singles that Christian radio refuses to play, but both songs are being sung by many choirs and praise teams throughout the United States. This situation kind of reminds me of Tonéx when he came out and the gospel community threw him away. Some of gospel music’s best songs were written by this man and yet we don’t play his songs anymore on mainstream Gospel and Christian stations. 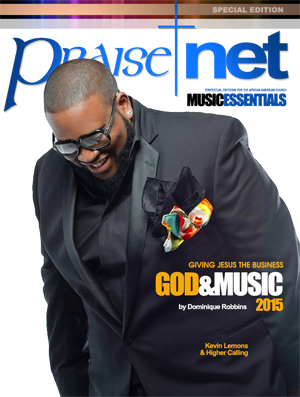 And it came to pass, when the priests were come out of the holy place: (for all the priests that were present were sanctified, and did not then wait by course: 12 Also the Levites which were the singers, all of them of Asaph, of Heman, of Jeduthun, with their sons and their brethren, being arrayed in white linen, having cymbals and psalteries and harps, stood at the east end of the altar, and with them an hundred and twenty priests sounding with trumpets:) 13 It came even to pass, as the trumpeters and singers were as one, to make one sound to be heard in praising and thanking the LORD; and when they lifted up their voice with the trumpets and cymbals and instruments of musick, and praised the LORD, saying, For he is good; for his mercy endureth for ever: that then the house was filled with a cloud, even the house of the LORD; 14 So that the priests could not stand to minister by reason of the cloud: for the glory of the LORD had filled the house of God. —2 Chronicles 5:11-14

Gospel and Christian music have become more main­stream with labels that have both the power and money to get things done. How this will evolve Gospel remains to be seen.

The biggest gospel tour of the year is coming to a city near you. Festival of Praise, a 50-city concert tour features some of the best names in Gospel music including multiple GRAMMY®, Dove and Stellar Award-winning recording artists Fred Hammond, Donnie McClurkin, Kim Burrell, with Hezekiah Walker (in concert 9/30-10/31) and Israel Houghton (in concert 11/1-11/29).

The national tour kicks-off at Fallbrook Church in Houston, TX on September 30, and runs through November 29. Pre-sale tickets for the tour begin on Monday, June 8. For a listing of tour dates and to purchase tickets see below and please visit www.festivalofpraisetour.com, additional shows will be announced in the coming weeks.

Festival of Praise partnered with VIP Nation for premium concert ticket packages, which includes a VIP meet and greet in each market. VIP packages will be available by Monday, June 8, for more information, please visit www.vipnation.com. The Festival of Praise International Tour will kick off in the first quarter of 2016.

Festival of Praise Tour 2015 will be held at arenas, performing arts centers and theaters, across the country. The family style tour, a phrase coined by Hammond and McClurkin, is a platform to uplift, motivate, encourage, inspire and entertain.

The tour will feature some of Gospel’s biggest and brightest on the same stage with ensemble performances and music by each artist highlighting their classic hits and most memorable anthems.

In conjunction with this year’s theme, Hammond produced “Trying to Make It Home,” a song which features vocal performances by Hammond, McClurkin, Burrell, Walker, Carree, Reedy and Cortez. The single is co-written by Hammond, Burrell, Carree, Reedy, Calvin Rodgers, and Phillip Feaster.

“The concept of ‘Trying to Make it Home,” is a collaborative effort by the artists on this tour and ties in perfectly with our purpose,” says Hammond, the co-creator of Festival of Praise. “With all the discourse, upheaval and negativity happening around the world, we all agreed that there’s one common thread that people are searching to find. People are trying to reach a safe place and home represents that for many people.

The Festival of Praise Tour 2014 was overwhelmingly successful, “We were blessed,” continues Hammond. “And we are back bigger and better. It will be an awesome evening of inspiration filled with a message of hope and restoration.”

The Festival of Praise Tour is created by Fred and Ray Hammond and produced by Face To Face, Inc. Adam Zagor of Universal Attractions Agency is the booking agent and Al Wash of ALW Entertainment is the entertainment consultant.