The vast majority of Americans—American politicians most especially—who oppose the proposed nuclear arms agreement with Iran describe themselves as “Christian.” America’s Old Testament racist tribal pro­cliv­i­ties, her thirst for ven­geance and de­mand for the ut­ter hu­mil­i­at­ion of her sworn ene­my Iran, mis­ses a most val­u­a­ble and important lesson of history: that, pressed to extremes, a sovereign people would rather die on their feet than live on their knees.

When the people of Gibeon heard what Joshua had done to Jericho and Ai, they resorted to a ruse: They went as a delegation whose donkeys were loaded with worn-out sacks and old wineskins, cracked and mended. The men put worn and patched sandals on their feet and wore old clothes. All the bread of their food supply was dry and moldy. Then they went to Joshua in the camp at Gilgal and said to him and the men of Israel, "We have come from a distant country; make a treaty with us."

I am told politics is the science of managing public perception. What I am actually seeing is politics is the science of managing the public perception of stupid people. Intelligent, reasonably informed people have already made up their minds about whatever the issue of the day is. The political jump ball is over the toxic pool of tribalists—on the left and the right—who don’t bother to research or to even think for themselves, but who instead rely on sound bites from the Fox News Channel or MSNBC. I say this because most anyone with even half a brain can read through all the talking-head rhetoric on both sides and see it for what it is: manipulative political speech. Mature grownups will broaden the range of their data input and decide for themselves based upon a range of sources. The majority of America, sadly, trend toward tribalism: if you were raised conservative you’re likely a conservative, if you were raised liberal, you’re likely a liberal.

It seems the overwhelming majority of the American public falls into tribal classes and are either too busy or too lazy to properly educate themselves on the issues of the day. They just do whatever Bill O’Reilly, Rush Limbaugh, Rachel Maddow or Chris Matthews tells them to. And that’s what politics is actually about: managing stupid people. Well-informed people are much, much harder to manipulate or to even lie to. Listening to all the often comical and obvious lying going on in American politics, I have to conclude the vast majority of the American public is, frankly, ignorant in a tribal sense, and the politicians—by all evidence—seem to agree.

It wouldn’t surprise me if most of the uproar over the Iran deal wasn’t somehow manufactured; if Israeli Prime Minister Benjamin Netanyahu wasn’t deliberately playing Bad Cop to Obama’s Good Cop. After all, the Iranians aren’t likely to take seriously any deal the Israelis actually like. Congress could likely also being playing along per the president’s wishes, giving him grief and placing the treaty support in doubt. It wouldn’t be the first time events of this administration mirrored a plot from The West Wing.

I actually hope that is, in fact, the case; that the extreme stupidity gripping the nation is a tactic calculated to get the Iran deal locked down, and that our leaders in Washington aren’t actually playing politics with global thermonuclear war. I am, of course, just cynical enough to believe that, sadly, there is no tactic involved and that Washington really is just that broken and just that juvenile, and that the American public really is naïve enough, underinformed enough, to snatch defeat from the jaws of victory. We’re all idiots in this, I suppose. Nobody’s saying this is a great or perfect idea. But nobody’s got a better one. Only an idiot demands no idea over a flawed one.

Not Perfect: But much, much better than what we have now: nothing.

Would Jesus Make This Deal?

The men of Israel sampled their provisions but did not inquire of the LORD. Then Joshua made a treaty of peace with them to let them live, and the leaders of the assembly ratified it by oath. Three days after they made the treaty with the Gibeonites, the Israelites heard that they were neighbors, living near them. So the Israelites set out and on the third day came to their cities: Gibeon, Kephirah, Beeroth and Kiriath Jearim. But the Israelites did not attack them, because the leaders of the assembly had sworn an oath to them by the LORD, the God of Israel. The whole assembly grumbled against the leaders, but all the leaders answered, "We have given them our oath by the LORD, the God of Israel, and we cannot touch them now."

I suppose it should amaze me that the vast majority of Americans—American politicians most especially—who oppose the proposed nuclear arms agreement with Iran describe themselves as “Christian.” In today’s politically-charged atmosphere, “Christian” can and often does mean “the very antithesis of the teachings of Christ.” Conservative Christians support the death penalty. Conservative Christians are virulently pro-gun. Nearly all political candidates claiming to be “born again” brandish or display firearms in campaign videos; something I cannot imagine Christ Himself ever doing—campaigning or brandishing a weapon for any reason whatsoever.

Implausibly, many of these self-described “Christians” want war. They demand war. War everywhere. Send troops into Syria. Into Yemen. To The Ukraine. Back to Iraq. Send troops everywhere except any country in Africa because these “Christians” really don’t care about black people. Politically, most of these conservative “Christians” openly despise the sitting president of the United States and continue to claim some ludicrous conspiracy theory that the president is, in fact, a secret Muslim (while also criticizing the church he attended for more than two decades) who was born in Kenya (as if either his religion or where the son of a U.S. citizen was born made any actual difference).

The scariest part about all of that Obama Hatred wasn’t even how ignorant all of it was but how effective it is: to this day, the majority of white conservatives, including white conservative Christians, believe Barack Obama is a Muslim based upon no evidence whatsoever other than the man’s name and the color of his skin. This is tribalism in its most pernicious sense: the preying upon weak, stupid, paranoid and deeply ignorant white people—some of whom hold advanced degrees. These people are just easy, too easy, to gaslight and to herd into packs of ignorant lemmings who will in turn keep the capriciously disingenuous politicos who work them like a Yo-Yo in office.

I rush to add Black America is just as easily manipulated if not more so. Both tribes are easily moved not by their hopes but by their ignorance and fear; the puppet masters playing to our emotion over our intellect in order to move us one way or the other. But it distresses me how deep this racism thing goes, that the heart of racism continues to beat even beneath issues of such national importance that all Americans, of whatever political or philosophical persuasion, should and frankly must stand together. The hideous, ugly, and almost comical truth, however, is racism is playing a role in this Iran nuclear agreement debate; the underlying race-based hatred and mistrust of our president indeed colors a great deal of Americans’ perception of virtually everything he does.

Or, put more bluntly: there are those, both in Congress and throughout America, who would vote this proposal down literally because the president is black. Absolutely no one in America will admit this; virtually everyone in America would call my assertion ludicrous. Virtually every black person in America if not every person of color in America, knows this is true: some Americans, and most conservative “Christian” Americans, are predisposed against peace efforts with Iran chiefly because of the president’s skin color. This is who we are. This is how ridiculous this nation has become or, actually, has always been. We’re just not hiding it anymore. 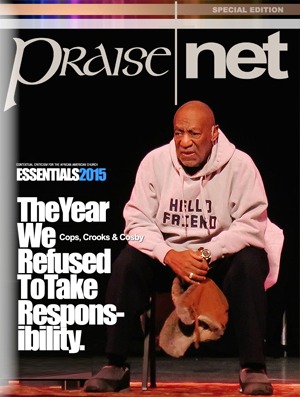 Do not repay anyone evil for evil. Be careful to do what is right in the eyes of everybody. 18 If it is possible, as far as it depends on you, live at peace with everyone. 19 Do not take revenge, my friends, but leave room for God's wrath, for it is written: "It is mine to avenge; I will repay," says the Lord. 20 On the contrary: "If your enemy is hungry, feed him; if he is thirsty, give him something to drink. In doing this, you will heap burning coals on his head." 21 Do not be overcome by evil, but overcome evil with good..  —Romans 12  NIV

They have no plan, they just hate this one. And they hate this one mainly be­cause Ba­rack Obama sup­ports it.

Iran Nuclear Deal Is Like Nothing the World Has Ever Seen

US News & World Report
Forget SALT, START, China, Libya and North Korea. Barack Obama’s agreement with Iran over its nuclear aspirations is like nothing the U.S. has ever seen before.

Years of negotiations rose to dramatic heights in Vienna on Tuesday, yielding an almost 100-page document forged from tense talks between Iran and the U.S., China, France, Germany, Russia and the U.K. Under the agreement, the Islamic Republic will be allowed to operate a limited version of its nuclear program in exchange for assurances that international inspectors will be able to verify for at least 10 years that it is not producing enough material for an atomic bomb. Iran will continue to adhere to a U.N. arms embargo for five more years and will get billions of dollars in relief as international sanctions against it begin to lift.

Supporters and critics of the agreement consider it historic.

“North Korea and Iran have been the top two nuclear proliferation threats that people point to, and we have just effectively closed off one of those from acquiring nuclear weapons. It’s a big deal,” says Kingston Reif, director for disarmament and threat reduction policy at the Arms Control Association, which advocates against nuclear weapons. “The stakes are clearly high here – the reason why we spent nearly two years trying to negotiate this agreement.”