Michael Brown was not, in any conceivable sense, Trayvon Martin, who paid for his Skittles and iced tea before being stalked by an unhinged, racist vigilante. Fitting Michael for a halo just makes the situation worse because whites see our hypocrisy. Through their grief, Brown's parents should find the inner capacity to admit their own responsibility in this. I promise you, they knew their son had a temper. They knew their son was likely a bully or certainly bullied upon occasion. And they knew, absolutely, their son could become aggressive when provoked. Put *that* into the mix, and maybe I‘ll suit up and march. But I won’t march for a lie.

I am not rallying against the current spate of presumed police brutality against black men. Much of what I am seeing is uninformed histrionics: here’s what we think we know, here’s what we saw on TV, here’s what we heard, here’s what we’ve been told. For me, there’s too much emotion loose on the streets of the nation and not nearly enough intellect. Our outrage seems mostly an anti-intellectual embrace of rhetoric over analysis, and the wrongheaded and deeply troubling determination to fight our legal case on city streets where no such cases are ever won. Simply failing to obey lawful instructions from a sworn officer is legal justification for the very tragedies we are rallying against. I’d rather fight the actual problem than flail away at a symptom of it.

Where was our outrage when some idiot gave a 12-year old *black* child an Airsoft pistol to play with in a city renowned for police overreaction? The news media keeps referring to the air gun as a toy. Airsoft pistols are not toys. It’s really not hair-splitting: BB guns are toys. AirSoft pistols are weapons, like a bow and arrow. This is how these guns have skated around the law requiring the bright orange cone over the end of the barrel: they’re not toy guns, kids should not be playing with them.

Did that make it right for Officer Timothy Loehmann, 26, to shoot twelve-year old Tamir Rice? Of course not. I think the officer panicked. I think the officer, as we are learning from the release of his previous personnel file, really didn’t belong on the street. However, just the fact that the officer panicked made it legal for him to shoot the kid. That’s the way it works: the bigger a punk the officer is, the more frightened he is, the easier it is to make a case for using deadly force. Not because his life was actually in danger, but because the officer likely peed himself; because he was afraid.

In such situations, cowardice is a cop’s best friend. I wasn’t there, I don’t know what happened that night in Cleveland. What I do know is a child is dead, and folks running around hollering and outraged refuse, absolutely, to take any responsibility at all for it. They blame the cop, but I blame whomever put that pistol in the hands of a twelve-year old and left him on the damned *street* of all places, unsupervised.

This is my problem: there simply is no accountability in Black America. All we want to do is blame White Folk. White Folk This, White Folk That.

What's Wrong With This Picture: $100 headphones, U.S. Polo Association jacket, but he needs to steal?

I Am Not Mike Brown

Amid the many protests across the nation are people holding signs which read, “I Am Mike Brown.” Well, I’m not Mike Brown. Which isn’t to say Mike Brown was a bad kid but that he seemed to be a typical kid and that some bad parenting or bad environmental issues were clearly evident in Michael’s behavior. None of which were grounds for Officer Darren Wilson to shoot him six times. He panicked. Or he was enraged. Either way, his emotional state provides the defense preventing a jury from indicting him.

Michael Brown was a thug. He was. I spent most of my childhood and adolescence running from thugs like Michael Brown. Brown was not Trayvon Martin, not minding his own business and murdered by a vigilante. He committed some petty shoplifting but, worse, threatened and intimidated the store clerk. Does that mean he deserved to be killed? Of course not. But it infuriates me that Black America continues to minimize our case for actual racial discrimination over these inflated events.

When am I going to hear Michael’s father confess that something went wrong in his son’s life? Do we actually believe that was the first time Michael not only stole something, not only boldly walked out, but turned and walked back in, aggressively threatening the shopkeeper? Am I supposed to believe that was the first and only time Michael did that? Look at the video, how practiced that move was: Michael using his size to intimidate. I’ve seen that move. I’ve been on the receiving end of that move. That’s what bullies do. I’ve seen this kid before; I’ve run from this kid, this kid made my life a living hell. I assure you, there are kids, somewhere in that neighborhood, who are afraid to tell anybody that Michael intimidated them, that he beat them or threatened them. He was a scary guy.

Officer Wilson was likely scared, too. He’d been attacked, he’d shot this boy, and yet the boy was now coming after him. Did he have his hands up or was he charging the cop? I don’t know. I do know, had Brown not robbed the store in the first place, I wouldn’t be writing this. I believe the officer panicked. I believe it was a bad call. But just the fact the officer panicked is enough to qualify him for a pass: if he feared for his life, he was permitted to use lethal force. And that rule, The Coward Defense, is the real problem: far too many sworn officers are just freaking cowards, far too many sworn officers are scared of black people and consider blacks more hostile than whites. Why? Because we are.

That's the real problem, everything else is theater. This is not a problem that can be fixed on the street by yelling at cops who had nothing whatsoever to do with this mess. This is a problem than can only be addressed by the courts and by the ballot box, two avenues the black community routinely take for granted, preferring instead to shoulder no responsibility for these tragedies whatsoever but to suit up and threaten violence; thus reinforcing the very stereotype that fuels these tragic incidents.

Yes, this mess is certainly about race, but it is even more about truth. Until both sides start telling it, I won’t be marching anywhere. 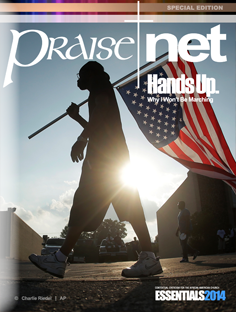 And he gave some, apostles; and some, prophets; and some, evangelists; and some, pastors and teachers; 12 For the perfecting of the saints, for the work of the ministry, for the edifying of the body of Christ: 13 Till we all come in the unity of the faith, and of the knowledge of the Son of God, unto a perfect man, unto the measure of the stature of the fulness of Christ: 14 That we henceforth be no more children, tossed to and fro , and carried about with every wind of doctrine, by the sleight of men, and cunning craftiness *, whereby they lie in wait to deceive; 15 But speaking the truth in love, may grow up into him in all things, which is the head, even Christ:  —Ephesians 4