In The Name of God

Most anything as stupid as DOMA has usually been shoved through Congress by (a) white people who claim to be (b) Christians, when Christ has absolutely, positively nothing to do with any of this. Jesus Christ never once mentioned or taught on the subject of homosexuality, but most Christians (who don’t study the bible anyway) simply assume He condemned it and that forcing everyone in a secular society to live a “Christian” life under “Christian” rules is somehow our job. It’s not. There is absolutely no biblical model for this idiotic behavior. Jesus never once tried to change Roman law, Paul never mounted any political campaigns or spent so mc=much as a shekel of church funds on Mesopotamian ballot initiatives. Where are these fat, pious loud mouths getting the idea that our role, as Christians, is to force all people, even unbelievers, to behave like Christians?

MegaTeleEveangelicals spend millions of their faithful tithes and offerings—money biblically commanded to be used to feed the poor—policing social behavior and enforcing Christian rules on society in an misguided an un-Christlike effort at social engineering. Jesus did not come to change the world or even to condemn it. He came to offer us life and to teach us how to love—things the Christian Right has little interest in actually doing.

The Defense of Marriage Act is an affront to our values as both Americans and, yes, Christians. There is nothing whatsoever “Christian” about DOMA, which has written bigotry into law. The mere fact that there’s even a debate about the constitutionality of a law created to deny a specific class of people equal protection and full faith and credit under the law, is obscene.

Searching For A Biblical Model

As a matter of faith, I cannot be supportive of gay marriage because I cannot find a biblical model for it. Maybe if we called it something else I could logic my way around my convictions, but, for me, “gay marriage” sounds a lot like “jumbo shrimp,” an oxymoron where two diametrically opposed terms have been linked together. I go into more detail about my reasoning here.

This is what happens when we substitute what we consider logical and reasonable for what the Word of God says. God exists within the realm of holiness, which we often confuse with a Pollyannaish naïve purity, but it’s really not. Purity is certainly a component of holiness, but holiness is a state of being that has been denied to us since mankind’s disobedience in the Garden of Eden. Fairness and justice are certainly components of holiness, but, if God were fair and if God were just, I’d be a dead man. Because of our disobedience—not Adam and Eve’s, but yours and mine--you and I would get what we so richly deserve rather than the free pass God’s plan of salvation offers us.

Jesus’ parable about The Prodigal Son was an abject lesson in unfairness. The unfaithful, greedy son disgraced his father and squandered his inheritance partying and whoring, while the faithful son remained at his father’s side. But who got the party? Who did the father rejoice over? Not the faithful son but the disobedient child who’d disgraced him, when that wayward son finally returned home. Christians expecting fairness from God miss the entire point of Jesus’ ministry.

Faith is a choice to embrace God’s truth and follow it even when that truth confounds both logic and reason. In and of itself, trusting in God is viewed by the world as unreasonable; you and I as wack jobs. The human mind craves justice, fairness, reasonableness and balance. Faith confounds all of those things. Justice, fairness, reasonableness and balance are subjective concepts which we redefine from culture to culture and from age to age. God’s word is immutable, transfixed and eternal.

As a civil rights issue, however, I cannot imagine why so many people are exhausting themselves and spending so much time and money trying to keep hatred and bigotry in our nation’s laws. The institution of marriage is in no way threatened by LGBT persons; straight people destroyed that institution long ago. I don't believe in Buddhism; should we ban that, too? Should we back an anti-Buddha constitutional amendment? Do things I don’t believe in threaten those things I do? Of course not. For, if they did, my belief would be meaningless. As a result, I am perhaps a little too ambivalent about the issue, other than that I really don’t think the matter is any of our business. The community and the state should not be in the social engineering business. Who are we to tell people who they can love and who they can or cannot marry? Remember when it was on the law books that blacks could not marry whites? Imagine the government writing that nonsense back into the constitution.

I am, perhaps, a disappointment to my LGBT friends because I am not pro-gay marriage so much as I am anti-bigotry. I am, after a fashion, insisting on having it both ways: disagreeing with the concept of same-sex marriage while defending, absolutely, anyone's right to practice it. I would not be a great advocate for gay marriage so much as an energized defender of people having the right to love who they love and do what they want so long as they keep the noise down and don’t bother me. While I cannot locate a biblical model supportive of same-sex marriage, I do find one for loving people as they are and as we find them. Jesus was never so concerned with who folks were sleeping with as He was with connecting them to God. This is our mission: not to police behavior or force everyone to believe what we believe, but to tell the world Who Jesus is. We can hardly do that if we're preoccupied spending millions on institutionalized hatred while ignoring thee plight of the poor. The resources white conservative Christians invest in this mess, in the anti-abortion mess, surely offends God because the church leaves hungry and lost people on the street while spending millions on private jets for their megapreachers and millions more on ignorant glossy mailers trying to convince people to vote for this thing or that guy. This is not what the church was deigned to do. We, like Jesus, should go about our ministry without distraction, first remembering what that mission actually is. 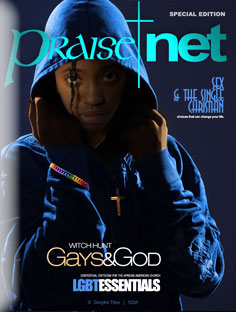 Bishop Wayne T. Jackson of Impact MA survey released today by LifeWay Research, a Nashville-based Christian research group, finds 44% say yes, 43 % say no and 13% are unsure. The survey of 2,144 U.S. adults was conducted before President Obama evolved to support marriage equality and his GOP rival Mitt Romney revved up attention to his current view that marriage is only for one man and one woman.

It found that, born-again, evangelical or fundamentalist Christians were the most negative: 82% call homosexual behavior sinful, 14% don't.

But very few, just 26%, told LifeWay that if they knew a church preached on homosexual relations as sinful, that would have a positive effect on their choice to visit or join that church. However, 36% said knowing that would be a strike against that church choice and 32% said it would have no impact. READ COMPLETE ARTICLE
.