What the Black Church does well is pageantry. They put on a good show. What they do worst is connect people to Jesus. In 50 years in the Black Church, no one has ever asked me if I knew Jesus. They ask me what church I go to. The church connects people to each other and to itself. But, sooner or later, many move on because there’s no anchor to God. God is often a guest in His own House while we celebrate endlessly and work tirelessly for the next big show: Usher’s Annual Day, Pastor’s Anniversary. There is a rich social contract within these organizations. Leaving feels like a divorce: it’s painful and destroys trust. But, sooner or later, amid all the noise and warm embraces, we find unanswered questions forming the water’s edge between religion and relationship. We begin to mistake our relationship with the church or pastor with a relationship with God. Most of us, myself included, have simply not been taught very well. The dreary task of educating people about the basics of doctrine and the nature of God is often colorless, thankless work performed perfunctorily by willing workers who are nonetheless reading from a pamphlet rather than illustrating from experience. We slog through it over six miserable weeks, and now back to our show.

Much of what is posted on this site angers and offends African American churchgoers, who nevertheless come back here, week after week, to get even further incensed at my irreverence and lack of deference to their particular franchise or whatever pastor they think is holy. Just like the last pastor they thought was holy, and the pastor before that. When I was coming up, you stayed in your church until you were carried out by six. Now, many of us are simply adrift, moving from church to church to church. Why? What are we looking for? We lose our faith in this pastor and then immediately start worshiping—yes, that’s what this is—another pastor, who inevitably disappoints The first clue: a pastor who allows himself to be worshipped does not know God, is not in The God Business. A pastor’s task is to do as The Master commands, to corral the sheep and make sure everybody gets fed. His job is to connect you to Jesus, but his ego and his ignorance often becomes the roadblock. Our journey ends at the pastor’s desk because he himself does not know God. You assume he does, after all, he’s the pastor. But then you catch him a little dirt. And, where there’s a little dirt, there’s just as often a fungal infection.

The pastor’s real job is to get out of the way. We are all on a journey: his job is to help lead, help guide, but, ultimately, to make himself irrelevant as you move toward and connect to Jesus Christ.

The only reason anything posted here sounds insulting, disrespectful or even shocking is because most of us have become indoctrinated, over a lifetime, into Church Folk Mess to the point where simply pointing out ways and means by which we disappoint and even disgrace God seems blasphemous; not to God but to the church. Our allegiance is twisted to the point where it is an allegiance to the social strata of the church, and our worship is not of God but of our pastor, whom we regard as a celestial if not magical being. Beloved: our King must be Jesus, not Pastor So-And-So, and our first duty is to God, not to the foolishness we do down at the church house. The African American Church is a shared experience. It is part of who we are, a proud tradition handed down one generation to the next. But, look around—at prayer meeting, at bible study: only a fraction of Sunday’s crowd is there. Why? Because the church is not making disciples. It is putting on a show.

No Connection: Where is God when the music stops playing?.

The Case For Christian Cynicism

We are living in times where a show is simply not good enough. The drift away from the church is because the church is designed to support a relationship that has not developed—the connection between you and God. In many if not most cases, the church has no definable objective in the very community it is located within. We don’t know who those people are living right next door to or right across the street from the church. Worse, the fact we don’t know who they are doesn’t bother us. We pass them on the way in and on the way out. Our pastor doesn’t know who they are, has made no effort to know who they are or what their needs might be. A church with no roots in its own community is in a ridiculous state of denial about its very nature. It is in a severely dysfunctional state because it connects no one to God. Your pastor would know that if he knew God. If he knew God, he’d be thirsty, hungry, if not desperate to make God real to you in a meaningful way. He would be troubled, saddened and distraught if he could not be effective in that ministry.

But this is not what we do. What we do is practice for the show, prepare for the show, labor over the show, and put on the show. Then, exhausted and fanning ourselves, we head off to the buffet joint. We confuse salvation with church membership, offering them as a combo platter by “opening the doors of the church,” a misnomer that confuses seekers who came looking for Jesus but found only paperwork and the right hand of fellowship.

I’m often accused of being a cynic. I believe there’s a role for Christian Cynicism. I believe God has enough people walking around with pony smiles plastered on their faces. He has enough people faking it. I’ve been in this Christian experience for a half century, now, visited churches across this country. What is posted here is not universal to all churches, but a great majority of those I’ve experienced are, to one degree or another, dysfunctional in the sense that the most vital connections are not being made.

Sooner or later, we realize the show isn’t enough. The pageantry isn’t enough. We are at church three, five days a week, exhausting ourselves in “ministries,” but there’s still an emptiness in our lives. Because, after the party is over, after we’ve shut the lights and driven past the neighbors we don’t know and don’t care to know, once we’re alone in our home, in our bed, with our thoughts, we can’t help but be confronted by the realization there’s nothing there. For many of us, God does not exist, does not function, without all the pageantry, because we’ve associated the music and lights and hollering with the office and function of The Holy Spirit. But, left all by ourselves, there is nothing but silence. A connection that was never made.

This is why this site exists. Not to demagogue or tear down the African American Church, which we love as much as anyone else, but to help make that connection. To get out of the way. To provide resources, within that space, that quiet time when you’re not running yourself ragged for this auxiliary or the next, to provide context and perspective on important questions and to make a rational case for faith in Jesus Christ.

Thank you—even those of you who are offended or enraged—for visiting with us. 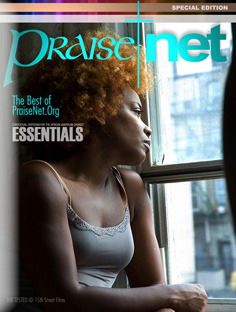 "But mark this: There will be
terrible times in the last days. People will be lovers of themselves, lovers of money, boastful, proud, abusive, disobedient to their parents, ungrateful, unholy, 3 without love, unforgiving, slanderous, without self-control, brutal, not lovers of the good, 4 treacherous, rash, conceited, lovers of pleasure rather than lovers of God-- 5 having a form of godliness but denying its power. Have nothing to do with them.6 They are the kind who worm their way into homes and gain control over weak-willed women, who are loaded down with sins and are swayed by all kinds of evil desires, 7 always learning but never able to acknowledge the truth.8 Just as Jannes and Jambres opposed Moses, so also these men oppose the truth--men of depraved minds, who, as far as the faith is concerned, are rejected. 9 But they will not get very far because, as in the case of those men, their folly will be clear to everyone."   —2 Timothy 3 (NIV)

"You, however, know all about my teaching, my way of life, my purpose, faith, patience, love, endurance, 11 persecutions, sufferings--what kinds of things happened to me in Antioch, Iconium and Lystra, the persecutions I endured. Yet the Lord rescued me from all of them.12 In fact, everyone who wants to live a godly life in Christ Jesus will be persecuted,13 while evil men and impostors will go from bad to worse, deceiving and being deceived.14 But as for you, continue in what you have learned and have become convinced of, because you know those from whom you learned it,15 and how from infancy you have known the holy Scriptures, which are able to make you wise for salvation through faith in Christ Jesus. 16 All Scripture is God-breathed and is useful for teaching, rebuking, correcting and training in righteousness,17 so that the man of God may be thoroughly equipped for every good work."
—2 Timothy 3 (NIV)