The War Department: Music In The Black Church

The schism begins with these devilish contracts churches draw up. A church offering you a contract--for any ministerial purpose--is in sin, period. It is not conducting itself biblically, as contracts between Christians are not biblically enforceable [I Cor 6]. I do not sign legal contracts with churches. It is pointless because, by biblical command, I am restrained from suing a believer. I may sign a covenant which could be submitted to binding Christian arbitration, and I’ve seen that done in some churches, but would not employ the powers of the secular state to make it a legal document. I know of black pastors who agree lawsuits between Christians is biblically wrong, but I personally know of no black pastors who do not have a legal contract with their churches. A church that fails to honor its covenant is no church at all. Dragging the state into it, to collect money from an apostate, backslidden and blasphemous corpse of an abomination to God, makes me just as big a hypocrite as they. Such an action forces me to deny the very God I claim to serve. It is these contracts, between churches and music ministers, that institutionalize the demonic infestation that routinely takes residence. The relationship becomes all but exclusively about money, with ministers of music remaining in ungodly churches because they need the money or churches putting up with unbiblical behavior from ministers of music because they can’t afford to pay out the contract and boot the guy. Both situations are wrong. Both make all parties concerned liars. Additionally, ministers of music who knowingly sign up with churches they know, for a fact, are run by unspiritual “boards” or pastors with demonstrable ego problems, who are obviously out of fellowship with God, have only themselves to blame for the subsequent hell they find themselves in. If you are a minister, if you are truly called of God, have the courage to wait on your ministry [Romans 12:7]. Get a job in a hardware store or drive a bus or something, and serve instead with a pastor who may not be able to afford you but whose investment is obviously in Jesus Christ and, therefore, in you. By making the ministry about money, you limit your horizons, forced to continually gravitate toward these apostate egomaniacs as it is only these large and often ungodly “churches” who can afford full-time help.

God’s man typically won’t spend a lot of time negotiating salary, but will instead put on his best poker face, looking the pastor in the eye and telling him, soberly, that he’d accept, “Whatever’s in the envelope.” This is a litmus test many of our churches fail: the integrity test. Churches know what the guy is worth. They also know what they can prayerfully afford. The minister knows what he needs to exist, has some idea of what the church can afford. Negotiation over these points is not biblical; there is no biblical model for it. Abraham told Lot to take whatever he wanted [Gen 13]. By faith, tell the church to do what it prayerfully can. You will know, in *very* short order, whether the church is being an honest broker or whether they are ripping you off. If the pastor is earning $100,000 and the church pays the minister of music $30 thousand, there’s something intrinsically wrong about that. As often as not, an anointed, gifted, spiritually empowered minister of music puts butts in seats and, therefore, makes the pastor’s fat salary possible. A pastor earning such big bucks should consider voluntarily dropping his own salary ten grand or so in order to more appropriately honor God’s man who, battling on the front lines, is actually as responsible if not more responsible for the church’s income than the pastor is. The minister of music is usually leading the ministry responsible for the greatest portion of the church’s income, for which the church then rewards the pastor while forcing the musician to exhaust himself working side jobs. This is not just bad ministry, it is bad business, the business plan of chimpanzees Any businessman knows, you got a guy earning money for you, you lock him in. You reward him. You engage with him, you empower him. This is not what we do. The biblical model is that the anointed minister is to be housed and supported by the church, that he is to have no other duties or jobs but to focus, day and night, on the ministry of music.

Churches treat the pastor as the star of the show, which, again, is biblically wrong. The star of the show is Jesus. The church calls the pastor, not the other way around. The pastor is the undershepheard, providing vision and leadership, but he is not to be worshipped or idolized. Churches treating pastors like CEO’s are led by people who are undereducated in biblical leadership. A pastor is no greater and no lesser than the congregation he leads. He puts his socks on one at a time like everybody else. A church’s minister of music invests long hours every week finding songs, learning how to play them, learning all the instrumental and vocal parts of every song, and then teaching those parts, individually, to each musician and singer. The minister of music invests many hours away from the church preparing for his time at the church. Adding an extra burden of frivolous “office hours” just to justify this guy’s typically meager salary is simply not biblical. The biblical model, from Chronicles, is musicians were set aside and ordained for their ministry like the rest of the priests. They were full-time workers. 1 Chronicles 9:33 states: “Now these are the singers, the heads of father’s houses of Levites, dwelling in the chambers of the temple free from other service, for they were on duty day and night.” 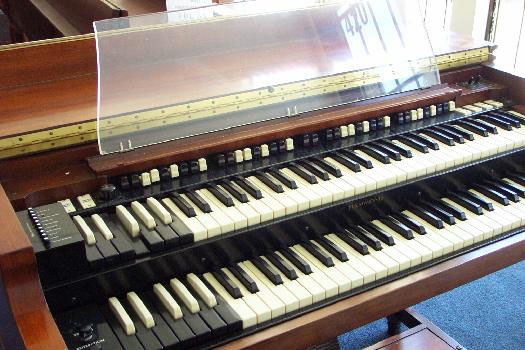 The Holy Desk: Fewer anointed musicians with each successive generation.

Musicians: don’t sign any contracts, but in love, speak again to the pastor and share your concern that you’re being open and spiritually available to the ministry while the ministry is bargain hunting. Your investment is in that church. You should expect that church to invest in you--without your having to play negotiating games. You should never, ever, have to ask for a raise. The wise pastor, the Spirit-led pastor, will recognize your value, will see a return on the church’s investment. A smart secular businessman will lock in his key talent by rewarding performance. It is only in the our tradition where we routinely try and get over on people--key, talented, gifted, anointed, inspired people absolutely vital to the ministry--by low-balling them while stuffing the pastor’s pockets with cash. This is what we do. Which is why we are where we are, and why so many of our churches have this revolving door out front. Pastor: lock your people in. make them financially secure and thus less vulnerable to financial attacks from the enemy or financial lures from other churches, Make them feel wanted and appreciated and welcomed and loved. Stop running your church like it’s a Burger King. If your church was your business, the wise businessman takes his cut *last--*after all of his key employees have been rewarded and taken care of. The wise business owner never takes profit out of his business until that business is secure. Only in our churches do we see, routinely through budget reporting, the pastor taking his cut while continuing to lowball key personnel who make that pastor’s fat bonus possible. This is unbiblical and un-Christlike behavior. It’s not even smart business. But it’s what we do.

It’s also why so many of our churches remain on the seesaw: up for a few years, struggling the next. Because they are being run by idiots, by people not plugged into God in any meaningful way. Making your music minister take a night job as a janitor or run around giving piano lessons and other stupid stuff distracts him from his most vital work: the rehearsal process. It is through the repetition of rehearsal that God’s truth becomes deeply embedded in the hearts and minds of the performers, as they sing God’s truth over and over, as they play it, as they learn it, live it. This, even more than Sunday morning, is the true value of your music minister: to reinforce and embed God’s truth in the congregation. Yet our churches routinely lowball these people and/or insist on them working useless and pointless “office hours,” because our mentality is rooted in the hourly wage model of factory work as opposed to God’s value-based system. The worst web designer you can find is still worth $65 hour, while a counter gal at Burger King is worth minimum wage. You don’t ask the web guy to come in and sit, doing nothing, just to justify his salary. He has specific skills which have a specific market value.

Applying the Burger King hourly wage mentality to your minister of music is simply ignorant. The anointed and gifted music minister has specific and proven skills which have a market value which is easy to assess. I am aware of no churches who do this, but the better business model would be to open the church’s books and look at the numbers before this musician was hired and those after a year. Whatever percentage of increase or decrease in the church’s income should become the annual adjustment for that musician’s salary. No church will admit its income has doubled since this talented man of God arrived. They will, instead, cling to their unbiblical contract, paying the musician maybe a 4% annual raise when the church’s income has increased by at least 35-60% since his arrival.

They know this man is making a huge difference in the overall financial health of the church, but keep that a secret, refusing to acknowledge his contribution or allow him to participate in that increase as biblically mandated [I Cor 9]. Many churches do, however, reward the *pastor* for such overall income increases while routinely nickel-and-dimming the persons actually responsible for the increase. These churches are liars. They call themselves churches but are run like bad businesses. The minister of music can see, with his own eyes, and know the church is growing. He should not have to ask for a reasonable bonus or timely and reasonable increases. Likewise, if the church is shrinking, the anointed minster should volunteer to have his salary reduced or even eliminated if that helps keep the doors open. This is biblical accountability. I have only rarely seen this go on.

A Brief Biblical
Theology of Music

Music and Language
In the Biblical-times music, (3) there is no strong dichotomy between speaking and singing. In Scripture language is generally connected to the life of the person. For example, Isaiah confesses sinfulness by saying "I am a man of unclean lips, and I live among a people of unclean lips" (6:5). Jesus says, "You brood of vipers, how can you, being evil, speak what is good? For the mouth speaks out of that which fills the heart" (Mat 12:34). "Not what enters into the mouth defiles the man, but what proceeds out of the mouth, this defiles the man. . . But the things that proceed out of the mouth come from the heart, and those defile the man" (Mat 15:11-18). The concept of the mouth expressing the heart and the words of a person being taken as the essence or heart of a person is ubiquitous in Scripture. Likewise, it is the Word of God which is the instrument of regeneration (1Pe 1:23), the building block of faith (Rom 10:17), and the standard of sanctification (2Ti 3:16). Jesus teaches, "It is written, 'Man shall not live on bread alone, but on every word that proceeds out of the mouth of God'" (Mat 4:4; also Psa 19, 119).