The Ministry of Music In The Bible

In order to have an informed dialogue about God & Music, it's important to understand the biblical role of the ministry of music. A brief examination of the public ministry of music during Bible times, offers significant lessons for church music today. I came across this paper, by Gregg Strawbridge, Ph.D., which sums up my thinking on this issue pretty well (and saves me a lot of typing).  --cjp

The transition from the unsettled, nomadic life in the desert to a permanent lifestyle in Palestine under the monarchy afforded the opportunity for developing a music ministry that would meet the needs of the worshipping congregation at the Temple. Prior to this time the references to music are primarily in conjunction with women singing and dancing to celebrate special events. Miriam led a group of women in singing and dancing to celebrate the overthrow of the Egyptians (Ex 15:1-21). Women played and danced for the conquering David (1 Sam 18:6-7). Jephthat’s daughter met her father with timbrels and dance upon his return from battle (Judg 11:34). With the establishment by David of a professional music ministry of Levites, music making was restricted to men. Why women were excluded from serving as musicians in the Temple, is an important question that has baffled scholars. We shall comment upon it shortly. Women did continue making music in the social life of the people.

The book of Chronicles describes with considerable details how David organized the music ministry of the Levites. An insightful analysis of how David accomplished this organization is provided by the doctoral dissertation of John Kleinig, published under the tile, The Lord’s Song: The Basis, Function and Significance of Choral Music in Chronicles. For the purpose of our study we limit ourselves to a brief summary of those features that are relevant for the ministry of music today.

According to the first book of Chronicles, David organized the music ministry in three stages. In the first stage, he ordered the heads of the Levitical families to appoint an orchestra and choir to accompany the transportation of the ark to its tent at Jerusalem (1 Chron 15:16-24). The second stage occurred after the ark had been safely placed in its tent in his palace (2 Chron 8:11). David arranged for the regular performance of choral music at the time of the daily burn offerings with choirs if two different places (1 Chron 16:4-6, 37-42). One choir performed under the leadership of Asaph before the ark in Jerusalem (1 Chron 16:37), and the other under the leadership of Herman and Jeduthun before the altar in Gibeon (1 Chron 16:39-42).

The third stage in David’s organization of the ministry of music occurred at the end of David’s reign when the king planned for the more elaborate music service that would be conducted at the temple that Solomon was to build (1 Chron 23:2 to 26:32). David established a pool of 4000 Levites as potential performers (1 Chron 15:16; 23:5). They accounted for more than ten per cent of the 38,000 Levites. “Some kind of examination was probably necessary for the process of selection, since musical ability is not always inherited.” David himself was involved together with his officials in the appointment of 24 leaders of the watches, each of which had 12 musicians for a total of 288 musicians (1 Chron 25:1-7). These in turn were responsible for the rest of the selection of the musicians.

The Ministry of the Musicians
To ensure that there would be no confusion or conflict between the sacrificial ministry of the priests and the music ministry of the Levites, David carefully delineated the position, rank, and the scope of the ministry of the musicians (1 Chron 23:25-31). The performance of the ministry of music they were subordinate to the priests (1 Chron 23:28). The nature of the ministry of the musicians is graphically described: “They shall stand every morning, thanking and praising the Lord, and likewise at evening, and whenever burn offerings are offered to the Lord on Sabbath, new moons and feast days, according to the number required of them, continually before the Lord” (1 Chron 23:30-31). The context suggests that the musicians stood somewhere in front of the altar, since their music performance coincided with the presentation of the burnt offering. The purpose of their ministry was to thank and praise the Lord. They announced the Lord’s presence to His assembled people (1 Chron 16:4), reassuring them of His favorable disposition toward them. In 1 Chronicles 16:8-34 we find a remarkable hymn of praise that was sang by the Temple choir. “This song consists of portions of Psalms 105, 96 and 106, which were reworked and recombined to produce this remarkable liturgical text. The song itself begins and ends with a call to thanksgiving. A concluding petition and doxology are appended in 1 Chronicles 16:35-36. We thus have in 1 Chronicles 16:8-34 a carefully crafted composition which has been placed there to demonstrate the basic pattern of thanksgiving which David instituted for performance by the singers in Jerusalem.” 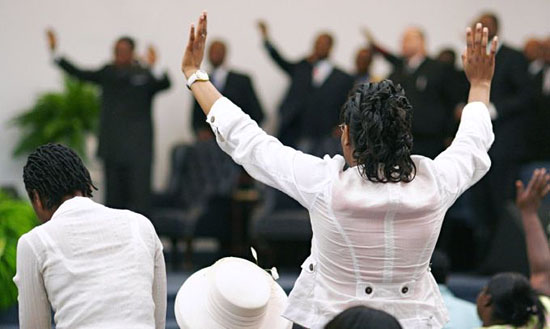 The music ministry at the Temple was successful for several reasons which are relevant for our church music today.

First, the Levite musicians were mature and musically trained. We read in 1 Chronicles 15:22 that “Kenaniah the head Levite was in charge of the singing; that was his responsibility because he was skillful at it” (NIV). He became directory of music because he was an accomplished musician able to instruct others. The concept of musical skill is mentioned several times in the Bible (1 Sam 16:18; 1 Chron 25:7; 2 Chron 34:12; Ps 137:5). Paul also alludes to it when he says: “I will sing with my spirit, but I will also sing with my mind” (1 Cor 14:15; NIV). The choir consisted of a minimum of twelve adult male singers who served between the ages of thirty and fifty (1 Chron 23:3-5).10 Rabbinical sources report that the musical training of a Levitical singer took at least five years of intensive preparation.11 The biblical principle is that music leaders must be mature with an understanding of music, especially today as we live in a highly educated society.

Second, the music ministry at the Temple was successful because its musicians were prepared spiritually. They were set aside and ordained for their ministry like the rest of the priests. Speaking to the leaders of the Levites musicians, David said: “Sanctify yourselves, you and your brethren . . . So the priests and the Levites sanctified themselves” (1 Chron 15:12, 14). The Levites musicians were given a sacred trust to minister continually before the Lord (1 Chron 16:37). Endtime Issues No. 39 Page 13 of 32

Third, the Levite musicians were full-time workers. 1 Chronicles 9:33 states: “Now these are the singers, the heads of father’s houses of Levites, dwelling in the chambers of the temple free from other service, for they were on duty day and night.” Apparently the Levites’ ministry of music entailed considerable preparation, because we read that “David left Asaph and his brethren there before the ark of the covenant of the Lord to minister continually before the ark as each day required” (1 Chron 16:37). The biblical lesson is that ministers of music must be willing to work diligently in preparing the music need for the worship service.

Lastly, the Levites musicians were not singing artists invited to entertain the people at the Temple. They were ministers of music. “These are the men whom David put in charge of the service of song in the house of the Lord, after the ark rested there. They ministered with song before the tabernacle of the tent of meeting” (1 Chron 6:31-32). Through their musical service the Levites “ministered” to the people. There are five other instances in the Old Testament were the Levites are said to minister to the people through their music (1 Chron 16:4, 37; 2 Chron 8:14; 23:6; 31:2). The ministry of the Levites musicians is well defines in 1 Chronicles 16:4: Moreover he appointed certain of the Levites as ministers before the ark of the Lord, to invoke, to thank, and to praise the Lord, the God of Israel.” The three verbs used in this text, “to invoke, to thank, and to praise,” suggest that the music ministry was a vital part of the worship experience of God’s people. An indication of the importance of the music ministry can be seen in the fact that the Levites musicians were paid out of the same tithes given for the support of the priesthood (Num 18:24-26; Neh 12:44-47; 13:5, 10-12).

The biblical principle is that the work of a minister of music should not be “a labor of love,” but a ministry supported by the tithe income of the church. It stands to reason that if a lay person volunteers to help in the music program of the church, such service does not need to be remunerated. Summing up, the music ministry at the Temple was conducted by experienced and mature Levites who were trained musically, prepared spiritually, supported financially, and served pastorally. As Kenneth Osbeck observes: “To minister musically in the Old Testament was a great privilege and a most responsible service. This is still true of a church music-ministry today. In a very real sense we are New Testament Levites. Therefore these principles established by God for the Levitical priesthood should be noted as valid guidelines for music leaders in a New Testament church.”

Kim Burrell:
A Time To Dance

How To Make Peace With Your Church Musician

Who Is Adrianne Archie?

When Saved Stars
Turn Back

This Is Adrianne Archie

Teena Marie:
Behind The Groove

Larry Who? The Father
of Contemporary Gospel

Then Solomon summoned to Jerusalem the elders of Israel, all the heads of the tribes and the chiefs of the Israelite families, to bring up the ark of the LORD's covenant from Zion, the City of David. 3 And all the men of Israel came together to the king at the time of the festival in the seventh month. 4 When all the elders of Israel had arrived, the Levites took up the ark, 5 and they brought up the ark and the Tent of Meeting and all the sacred furnishings in it. The priests, who were Levites, carried them up; 6 and King Solomon and the entire assembly of Israel that had gathered about him were before the ark, sacrificing so many sheep and cattle that they could not be recorded or counted. 7 The priests then brought the ark of the LORD's covenant to its place in the inner sanctuary of the temple, the Most Holy Place, and put it beneath the wings of the cherubim. 8 The cherubim spread their wings over the place of the ark and covered the ark and its carrying poles. 9 These poles were so long that their ends, extending from the ark, could be seen from in front of the inner sanctuary, but not from outside the Holy Place; and they are still there today. 10 There was nothing in the ark except the two tablets that Moses had placed in it at Horeb, where the LORD made a covenant with the Israelites after they came out of Egypt. 11 The priests then withdrew from the Holy Place. All the priests who were there had consecrated themselves, regardless of their divisions. 12 All the Levites who were musicians--Asaph, Heman, Jeduthun and their sons and relatives--stood on the east side of the altar, dressed in fine linen and playing cymbals, harps and lyres. They were accompanied by 120 priests sounding trumpets. 13 The trumpeters and singers joined in unison, as with one voice, to give praise and thanks to the LORD. Accompanied by trumpets, cymbals and other instruments, they raised their voices in praise to the LORD and sang: "He is good; his love endures forever." Then the temple of the LORD was filled with a cloud, 14 and the priests could not perform their service because of the cloud, for the glory of the LORD filled the temple of God.  —2 Chronicles 5