This Foolishness With Pastors

Does Ministry Have An Expiration Date?

The Bishop And The Bathtub

I'm sure somebody thought it was cute. Truthfully, it was cute, a seemingly innocent photo of Pop-Pop and grandbaby. But it's not 1965 anymore, when such photos were commonly taped to the fridge door and pressed into thick albums along with junior's' first haircut. What troubles me most about Bishop Larry Trotter's photo, posted to InstaGram, of himself and his granddaughter sharing a bath, is how out of touch the Bishop seems to be with the world he supposes to minister to. The world has changed since 1965, bishop. My mom likely had a few dozen such photos, yes, from the 60's, of my sister or myself at bath time, but she didn't pass them out to the local pedophiles or have them printed in the newspaper. The Trotter photo, which we have chosen not to post here, seems innocent only to the immediate family who understand the full context from which the image was taken. Outside of that bathroom door, nobody gets why this old man is taking a bath with a child, of either gender. What I'm certain was intended as a moment of sweetness creeped us out. I am most disturbed, however, by the bishop's failure to recognize what year this is. The photo marks him with an expiration date of perhaps 1972 at best, as such private family moments have been deemed inappropriate for public distribution for well over thirty years.

The Love of Jesus? Bishop Larry Trotter
in imperious pastor's scowl with bad Photoshop job on his head, French manicure and ridiculous, effem-inate bishop's ring. This is a really bad choice in optics, making the bishop look like a black Vincent Price in his Egghead role from the 1960's Batman TV series. The image projects vanity. Jesus would not take such a photo, nor would He allow himself to be photographed in a bathtub with a child.

More troubling is the lying, likely intended to help the bishop but backfiring, shrouding what was a likely innocent situation in ugly suspicion and making things much worse by trying to clean up an awkward but otherwise negligible moment. First was the lie of the photo having been posted by accident. This was a posed and carefully prepared image, not a candid photo taken in the spur of family play time. Trotter clearly intended the photo for public viewing. The bishop, or his daughter taking the picture, went to a lot of trouble to carefully stage the photo, sculpting the bath bubbles around them so as to cover the child’s nipples and any view of the bishop’s nudity. Second, it wasn't, as the church reported, "a large Jacuzzi tub." It appears to be a normal-sized bathtub, not that that makes any difference, given the proximity of the two. Third is their assertion that both the bishop and the child were wearing “trunks,” which is not impossible, but if they were, that underscores the first lie that the picture was not intended for public viewing. Toddlers around the world routinely swim nude in backyard wading pools and Mommy and Me time in the bathtub is hardly unusual. It seems unlikely the bishop was taking a bath, the child wanders in, he interrupts his bath, dresses himself, and either draws a fresh bath or gets back into what is now soiled bath water, with all the suds remaining at peak fluffiness. It’s even less likely a four-year old girl has swimming “trunks,” rather than a one-piece bathing suit.

The church's assertions seem to be needless inventions, whether they are or not. "It was a private family moment. We exercised poor judgment in posting it online." Done. The real problem is nobody wants to take responsibility anymore. The arrogant defiance of the indefensible makes Trotter look weak and frightened. The more childish bluster coming out of his camp, the more ridiculous the bishop seems. Nobody actually thinks Trotter is a child molester. The problem is people think Trotter is an idiot, which is far more damaging. A pastor's inability to simply admit a mistake is a red flag that he's been in the storm too long. Worse, anyone who works in communications will tell you: if you are on defense, you're losing. Trotter, and virtually every pastor mentioned here, has been playing defense and, thus, losing badly.

In another video clip, here’s the same bishop, on defense, defending his having mock-crucified what appears to be the same child in a staged protest against the Chicago teachers strike. That imagery is far more disturbing to me than Pop Pop in the tub. The mock crucifixion was just creepy and reinforces my suspicion that the bishop has stayed beyond his expiration date. 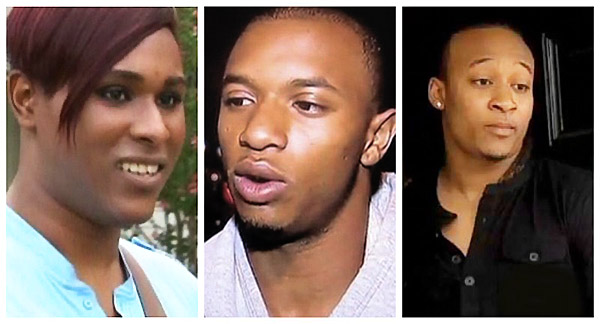 The Disciples: A rumored $1.5 million paid to Eddie Long accusers Robinson, Flagg, and LeGrande. How is it possible your married pastor can keep company with these young men and nobody seems to be troubled by it?

The lesson of King Saul, of King Solomon, seem to be an arc of usefulness beyond which these powerful and righteous men of God became consumed by ego and self-interest. Now given over to their flesh, these men believed they could do anything they wanted to. Saul became consumed by jealousy of David, his protégé and obvious successor. Rather than honor God by celebrating David, Saul clung to power, a kingly power he had disgraced. Instead of seeking God, Saul sought advice from a witch and schemed endlessly to kill David whom Saul presumed was out to kill him. For his part, David honored God and refused to kill Saul when the opportunity presented itself. In the end, Saul was God’s man: he was God’s to deal with. Judging God’s man was not David’s place.

King Solomon is remembered for being the wisest man in the bible, which misses the actual point of King Solomon who was, in fact, the biggest fool in the bible. This is what happens when you substitute religion for relationship, you end up doing ridiculous things like naming your church “King Solomon Baptist Church,” which does not honor God in any way because it gets the story wrong. The lesson of King Solomon is not the king's wisdom but the king's arrogance. King Solomon's is a cautionary tale, not some benign, positive and uplifting Sunday school lesson. Naming your church after him echoes and magnifies the biggest fool in the history of the world and informs everyone that the people of this church known nothing, nothing, about the bible. They're just Church Folk.

There are many stories in the bible that end this way. Not in triumph or celebration but in tragic personal failure following historic triumph that is difficult to explain to children in Sunday School: Noah having drunken sex with his daughters. Many churches round corners off of these bible stories so kids can draw pictures of the wise King Solomon in crayon and learn to trust God, but changing the narrative by being dishonest about how it ends is, in and of itself, blasphemy. Too many of us are simply Church Folk who don’t read and who do not study. At churches across the nation, Bible Study is typically a ghost town, with a bare fraction of the church’s membership attending. The overwhelming majority of people who identify themselves as Christians, white, black or otherwise, know precious little about Christ and less about the bible.

Their investment is in religion and their training is these half-truths taught to them as children in Sunday School classes: King Solomon The Wise. Shot-callers at most black churches, adults, with money, with bachelors and even masters degrees, often have biblical training at the kindergarten level because they’ve chosen not to invest in that part of their lives. This makes them gullible and easy prey for the backslidden pastor. Many of these people, Church Folk, are puffed up and insist on adding their letters of academia to every mention of their name, “Doctor” this and .MA added onto everything. But in this area, in the area of understanding the bible and knowing who God is, they have contented themselves with whatever they remember from being eight years old. And they name their church after King Solomon.

A Book By Its Cover

Why is it that the more popular and successful a preacher becomes, the stupider he dresses? Why can’t these guys wear regular clothes? What I like about clergy dress: it’s simple. It’s plain. The COGIC has it right: black shirt, white collar, that’s it. Dark suit, white shirt. The trend, among our leaders, is this “fashion forward” nonsense where they don the most ridiculous of suits, with all of these crazy straps and buttons and snaps and grid lines, cut in bizarre ways such that the lapels are huge or nonexistent, and the jackets close in weird ways. There is usually at least one or more oversized, gaudy ring on the pastors’ fingers, including idiotic bishop rings, but the growing trend is for married pastors to eschew the wearing of their wedding bands. They are blinging all over, including some gaudy, stupid-looking gold bracelet, but fail to honor their wives by simply wearing a gold band. I’m sure there’s some doctrinal nonsense supporting that choice, but the bottom line is the vain pastor, the pastor who routinely fails to visit the sick or sit with the dying but who obviously has way too much time on his hands to shop for Stupid-Looking Outfits, Hats and Blingage, declares, by his actions and appearance, that he does not know Jesus Christ.

There is no doctrinal position to support the absurd idea of Jesus Christ dressing, in any way, like Jamal Harrison Bryant. He looks like an idiot. As smart as the man is, as gifted as the man is, he would know his presentation undermines his credibility if his ego were not blinding his intellect. Too many of our pastors look like clowns, with these huge, stupid-looking ties, crazy shoes and crazy hats that have to be special ordered from the Idiot Pastors Warehouse. A pastor is supposed to echo the sublime and divine personal example of Jesus Christ, Who, by all accounts, owned nothing, had no bank account, dressed simply, and was not imposing, brassy or flashy. Whenever I see a pastor step on to stage blinging in his Clownware, it’s time to leave. There is nothing this man will say that I will in any way trust. He is clearly lost and does not realize it because he is cheered on by his ignorant, gullible followers, which makes the place a cult, not a church.